You can use Cloud Native Buildpacks to create Docker Images without having to write a single line in a Dockerfile.

Continue reading if you want to understand what's going on.

Containers might feel intimidating at a first sight, but it really isn't that complicated. First, containers are lies. The term "container" refers to a set of features from the Linux Kernel.

A container is another way to package your application for distribution. It's kinda like when we used to zip our applications, send to a server, unzip it there, and run (*cough, cough* lambda, *cough, cough*). It's like a zip file or a tarball, but one where you can also add instructions on how to run the application.

All this fuss over fetching a tarball and executing the contents.

For building container images, Docker is still King. There are many ways we can create Docker images. You could spin-up a container using an official Ubuntu image, run your commands inside the container and then commit your changes to create your image manually. Or you could write a Dockerfile, like so:

That's the common way. There is another way, though. What if I told you we don't need to write a single line of a Dockerfile to create a Docker Image? Enters Cloud Native Buildpacks.

You might have used Heroku already (or at least heard of it). Heroku is a platform where you can deploy your applications to. Its unit of work are called "Dynos", and you can deploy to Heroku using a regular git push command. Turns out Heroku uses the container model. When you do a git push they will essentially package up your application source in a container for you. The key-point is that you don't even need to know that. Well, most of the time.

They are able to do that using buildpacks. Buildpacks detect which engines your application use and is able to "guess" how to run your application. Let's create a Docker Image without a Dockerfile. You need to install the pack CLI tool. Follow their instructions to get it installed on your machine. You'll also need Docker, of course.

If you look at the output, you will see how the Heroku builder tries a bunch of buildpacks until one of them returns positive for the detection. The detection rules might be as simple as checking if you have a package.json file for the NodeJS buildpack, for instace.

If you try to open http://localhost:8000 in your browser, it won't quite work yet. We need one more thing to make it work: a Procfile. This file will be used to describe our process model. Let's create it:

We could have as many processes in our Procfile as we need. We'll explore that soon. For now, let's try running our app again. We need to stop the running container first.

Since we used the --rm option when running the container, it's completely gone now. We can now build it again and try to run it:

Now, let's try it on the browser again and... voilà!

Looks like we're done, but if you try to load the login or the register routes, you will see a "Mix manifest does not exist" error. That's right. The builder didn't install and compile our dependencies for us. Let's do that. We have been relying on the "auto-detection" feature of Heroku's builder, but we can help it. We can even combine different buildpacks to create our image. Let's instruct it to use the NodeJS buildpack and the PHP buildpack after that.

Before we do that, we need to instruct the NodeJS buildpack to also compile our assets for us. The NodeJS buildpack will look for an run a build NPM script on your package.json file (if you have a non-related build script already, you can add a heroku-build script, which will be used instead). Add the following line to it:

Now we can build our image using both buildpacks:

Now, if you try to access the login form, you will no longer see the "Mix manifest missing" error. 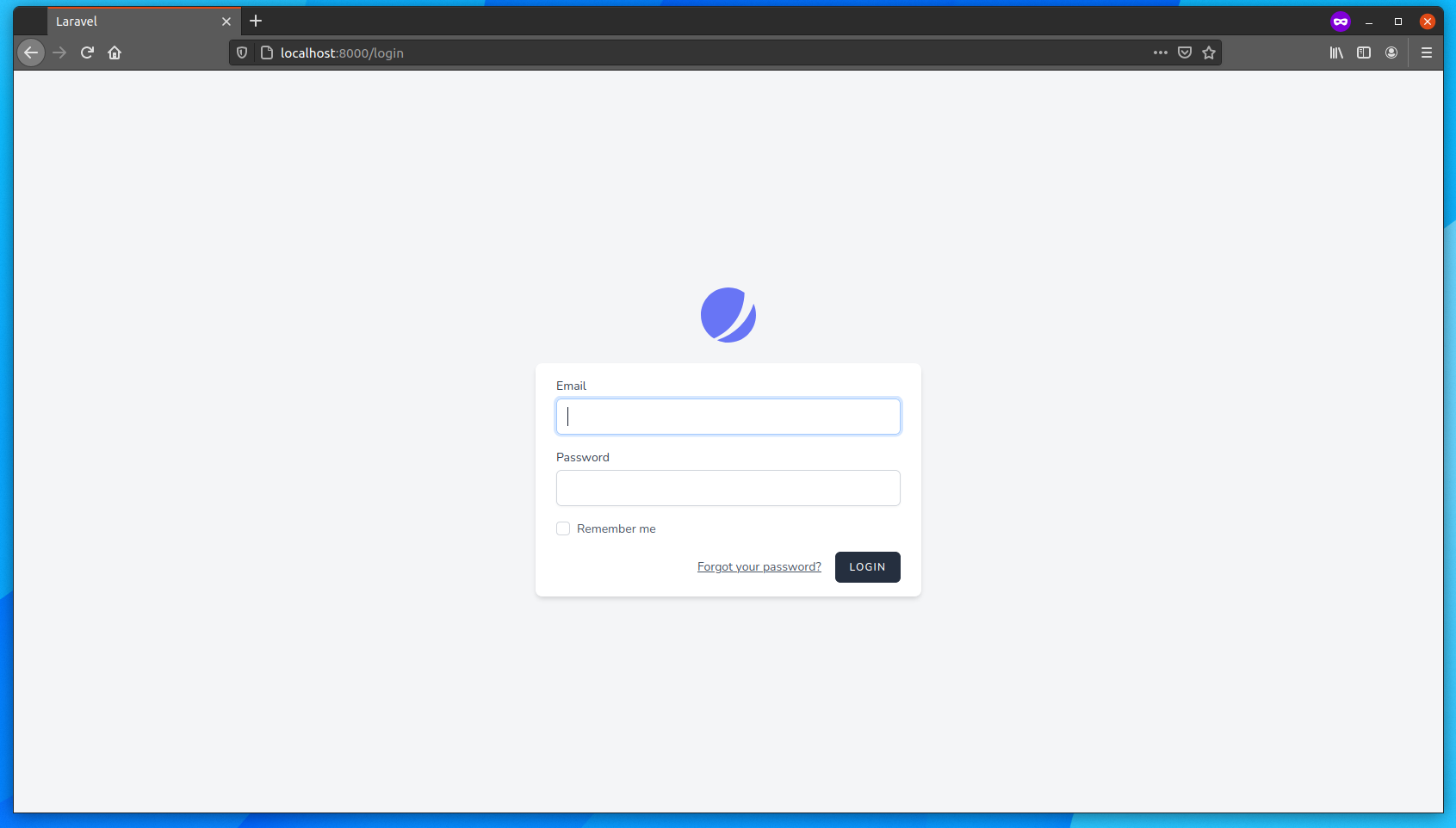 The form doesn't work as is. That's because we would need to run a database and configure the container to talk to that DB, but that's not the scope of this article.

As I mentioned, we can have multiple processes described in our Procfile, as many as our application needs. Let's create a console command in Laravel and add another process entry to our process model. If you want to know more about this process model, I recommend checking out this article.

First, edit your routes/console.php file and add the following lines:

Second, edit the Procfile and add another process called worker, like so:

Now, the builder will create one binary file you can use as the entrypoint when running the command. You can see the default entrypoint by inspecting the image:

I think the first process in your Procfile will be used as the default entrypoint. If you inspect the container, you will see the other binaries with the names we gave in the Procfile also living in the /cnb/process/ folder. To run our test:proc console command, we need to point the worker binary in that folder as the entrypoint, like so:

This will get your worker running in background, now you can read its logs by running:

Nice! If you don't specify the entrypoint, your container will start the first process defined on your Procfile.

To stop the worker, run:

I wanted to show you how we can make use of Cloud Native Buildpacks to build our Docker images without having to write a Dockerfile. Hope this was useful.